For a TOF-SIMS analysis, a solid surface is bombarded by primary ions of some keV energy. The primary ion energy is transferred to target atoms via atomic collisions and a so-called collision cascade is generated.
Part of the energy is transported back to the surface allowing surface atoms and molecular compounds to overcome the surface binding energy. The interaction of the collision cascade with surface molecules is soft enough to allow even large and non-volatile molecules with masses up to 12,000 u to escape without or with little fragmentation. SIMS is a very surface sensitive technique because the emitted particles originate from the uppermost one or two monolayers.
Most of the emitted particles are neutral in charge, but a small proportion is also positively or negatively charged.
The subsequent time-of-flight mass analysis of the emitted ions provides detailed information on the elemental and molecular composition of the surface.

TOF mass spectrometry is based on the fact that ions with the same energy but different masses travel with different velocities.
An electrostatic field accelerates the generated ions to a common energy.
The accelerated ions then travel over a drift path to the detector. The lighter ions fly with a higher velocity and arrive at the detector before the heavier ions. Measuring the flight time for each ion allows the determination of its mass. This cycle is repeated with a repetition rate of up to 50 kHz.

Modern TOF analysers compensate the small differences in initial energy and angle of the ions in order to achieve high mass resolution. The combination of a linear drift path and an ion mirror (reflectron) allow for mass resolutions (M/dM) of above 30,000.
Major advantages of this approach over quadrupole and magnetic sector type analysers are the extremely high transmission, the parallel detection of all masses and the unlimited mass range.
The pulsed primary ion beam can be focussed to a small spot (microprobe mode) and rastered to determine the lateral distribution of elements and molecules. In this mode of operation lateral resolution of down to 50 nm can be achieved.

During the drift time of the secondary ions, the extraction field is switched off and low energy electrons can be used to compensate for any surface charging caused by primary or secondary particles (charge compensation). Thus all types of bulk insulators can be analysed without any problems.
The time during which the extraction field is switched off can also be used to apply low energy ion beams for sample erosion.
In this case the low energy beam forms a sputter crater, the centre of this crater is analysed by the pulsed primary ion beam (dual beam depth profiling).
Surface Spectrometry
The aim of a static SIMS investigation is the analysis of the original, non-modified surface composition. As SIMS in principle is a destructive technique this means that the contribution of those secondary ions to the spectrum originating from already bombarded surface areas to the spectrum must be negligible. This quasi non-destructive surface analysis can be achieved by the application of very low primary ion dose densities. Surface Spectroscopy provides detailed elemental and molecular information from the outer monolayers.
1
High sensitivity in the ppm/ppb range
2
High mass resolution and accuracy even on insulating samples
3
High mass range

Depth Profiling
For Depth Profiling two ion beams operate in the Dual Beam Mode. While the first beam is sputtering a crater, the second beam is progressively analysing the crater bottom.
1
Depth resolution better than 1 nm
2
High mass resolution
3
Sputter speed of up to 10 µm/h
4
Ideally suited for insulators

3D Analysis
The visualisation of 3D sample structures is possible by combining spectral, imaging and depth information. 3D Analysis is ideal for the investigation of complex and unknown structures or defects.

Regardless of the knowledge about the sample before the measurement, the data can be explored afterwards to look for unexpected results, such as unknown structures, contaminants at interfaces and so on.

The x, y, z coordinates and mass of every secondary ion reaching the detector are stored.
The software can reconstruct spectra from any coordinate or group of coordinates, images from any section, vertical or horizontal, depth profiles from any selected area and various 3D views as required.
Principle of LEIS
In LEIS analysis the sample surface is bombarded with noble gas ions at an energy of a few keV. The ions are scattered by the atoms of the surface following the laws of the conservation of energy and momentum.

By measuring the energy of the backscattered ions the masses of the scattering surface atoms are determined. With the advanced analyser design of the Qtac100 the measured intensity is directly proportional to the surface coverage of the corresponding element and is not influenced by the chemical environment. This allows matrix independent quantification. 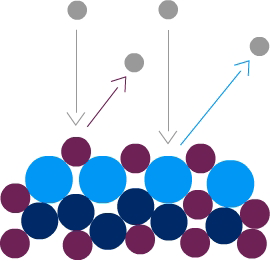 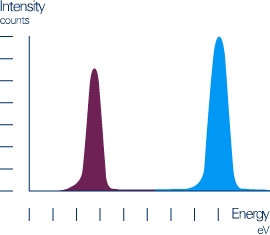 Energy spectrum of the scattered ions corresponding to the masses of the surface atoms
Surface Spectroscopy
This quasi non-destructive surface analysis can be achieved by the application of very low primary ion dose densities. Surface Spectroscopy provides quantitative elemental information from the top atomic layer.
Surface Imaging
By rastering a focussed ion beam over the surface, mass resolved elemental images (chemical maps) can be obtained.

This quasi non-destructive surface analysis can be achieved by the application of very low primary ion dose densities. Surface Spectroscopy provides quantitative elemental information from the top atomic layer.
Depth Profiling
Static depth profiling
In LEIS, depth profiling can be done in static mode, using only the information in the non-destructive scattering spectrum. During the analysis ions are scattered at the outer atomic layer, which lead to the detected surface peaks. In addition also ion scattering at atoms in deeper layers occurs. Those ions undergo an additional depth proportional energy loss. As a results, tails to the left of the surface peaks appear, which are corresponding to the in-depth distribution of the respective element over the first few nm.
Sputter depth profiling
For increased depth range or complex systems, sputter depth profiling is available. By sputtering the sample using a low energy Ar ion beam, and analysing the bottom of the sputter crater by LEIS, a sputter depth profile is recorded. The excellent surface sensitivity of LEIS allows to achieve high depth resolution, while the lack of a need for reactive ion sputtering allows quantification from the first nm of the depth profile.